Are you investing in eternity?  We can’t earn our way into heaven.  Only God’s gift of grace through Jesus gains us entrance.  Yet once in, Jesus tells us there is reward for how we invest our time and resources.  Our message series, E*TRADE, explores the biblical strategies for wisely investing in our eternity.

TRADING TIP #1:  What we do matters!  Investments on Earth influence rewards in Eternity. 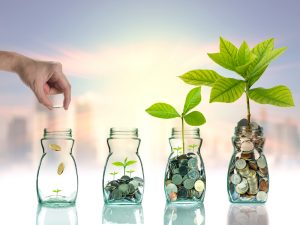 Claiming what isn’t mine

Holding what I have

Forgetting who I serve

BIG IDEA:  Our reward is based on managing God’s resources God’s way for God’s glory.

“Again, the Kingdom of Heaven can be illustrated by the story of a man going on a long trip. He called together his servants and entrusted his money to them while he was gone.  He gave five bags of silver to one, two bags of silver to another, and one bag of silver to the last—dividing it in proportion to their abilities. He then left on his trip.

“After a long time their master returned from his trip and called them to give an account of how they had used his money.  The servant to whom he had entrusted the five bags of silver came forward with five more and said, ‘Master, you gave me five bags of silver to invest, and I have earned five more.’

“The master was full of praise. ‘Well done, my good and faithful servant. You have been faithful in handling this small amount, so now I will give you many more responsibilities. Let’s celebrate together!’

“The master said, ‘Well done, my good and faithful servant. You have been faithful in handling this small amount, so now I will give you many more responsibilities. Let’s celebrate together!’

“But the master replied, ‘You wicked and lazy servant! If you knew I harvested crops I didn’t plant and gathered crops I didn’t cultivate, why didn’t you deposit my money in the bank? At least I could have gotten some interest on it.’

“Then he ordered, ‘Take the money from this servant, and give it to the one with the ten bags of silver.  To those who use well what they are given, even more will be given, and they will have an abundance. But from those who do nothing, even what little they have will be taken away.  Now throw this useless servant into outer darkness, where there will be weeping and gnashing of teeth.’  (NLT)